Winter had returned this weekend and it was with a nip in the air we left for Tourrette-Levens. Tourrettes-Levens is on the D19 heading north from Nice to Levens, another route is from the D202 via Aspermont. The walk is a Grade 2, approximately 10 km in length and very easy to follow made up of partly the GR51 and a local walk. The centre Tourrette-Levens is very pretty but like all the villages around Nice has taken the brunt of the housing pressure in Nice and the village has spread. We start the walk from the centre of the old village there are 3 car parks, orientate yourself with the church with the clock tower on the main street. If you are facing down the main street there is a wooden sign post on the left hand sign which indicates a cycle route number 14. Look to the other side of the road, the walk starts there, the GR markers (red and white) become clear and takes you through the village streets to descend on the easterly side of the village. The path is initially concreted but soon becomes an ancient stone track and zig zags down to Tra la Torre. 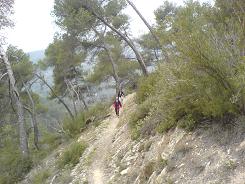 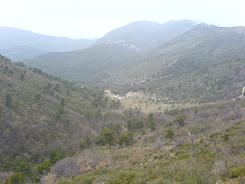 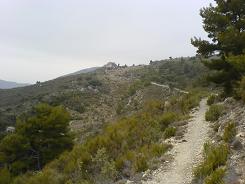 Cross the bridge and follow the road for approximately 300m and keep alert for a wooden sign post on the left, this is where we split from the cycle route and the road. The path now climbs up the valley side and turns east following a stream up through the trees. At the head of the small valley there are some houses, we cross the stream and head up the opposite side until we reach a wider forest road. Turn left along the road towards the houses and confluence of paths called Baisse de Bordinas; here you are faced with a few choices. We took the shorter steeper option and is signposted "Châteauneuf ruins" and heads off between two properties. The path climbs up the hill side up to a shoulder and cross roads. To the right is an alternative route to Baisse Bordinas, the left up to Mont Macaron or straight on to the "ruines" which are now visible. The path now contours and gives you good views of La Sauéra, Tourette-Levens and Mont Cima in the west.

The Chapelle St Joseph is the first building you come to before the Ruines of Châteauneuf, and the path splits off to the left before the Ruines. The ruins are medieval and hark back from a time when defence was important. It marks the site where the village of Chateauneuf-Villevieille re-sited from its Ligurians and Roman place of origin in the 6th Century. It was also the home for many of the counts of Nice. There is no natural source of water and would be gradually abandoned in favour of the former site of Villevieille, following the Treaty of Aix-la-Chapelle. The path leads down to the Col de Châteauneuf and the sign post showing the route is on the far side of the car park on the left. The path is a wide track that takes you to La Vignasse a cluster of houses, the path crosses the road and down between some houses. The path looks like it has been diverted here and used as a tip for garden rubbish by local residents, there are some new houses in a garish yellow but eventually you are back on a beautiful stone pathway.

The path zig zags down the hill and across the river then up the other side to Le Plan. In Le Plan you follow the road back up to the old village and hopefully your car