This was a lovely walk - almost a Pub walk only about 8.5 km with 450m climb. It is a circular route from Briançonnet through Gars, (we did not see any pubs though). Briançonnet is far up the Esteron valley, getting there is not the easiest. The two ways that seem the fastest are either from Entrevaux and the RN202 or via Grasse and the route Napoleon turning off after Séranon for St Auban. I guess it depends on where you are leaving from on the coast for the best option. 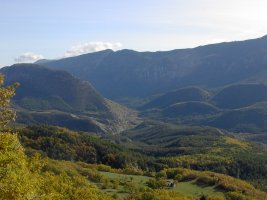 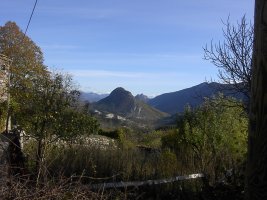 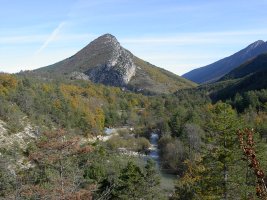 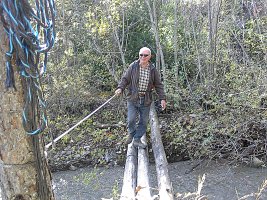 There is plenty of parking in the pretty village of Briançonnet. Walk down the high street to the church, on the right about halfway down there is a sign post 21. It is the GR150 so the markers to follow are the red and white markers of the GRs. The path takes you along the north side of a ridge of rock that runs down the valley. Above you on the crest are ruins of a fort with roman origins, the path runs lower down the slope through the trees.

After just over a km there is signpost 28, which marks a junction to the Esteron - we keep straight on to Gars. There is a very gentle climb followed by a steep descent at the end of the ridge down to the river. At the foot of the path there is a small tributary (Ubec) which has a log bridge. The path then has a choice of routes, both of which ends up on the gravel road running along the side of the river Esteron. Follow the road to the village. 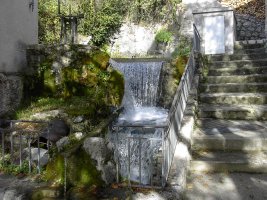 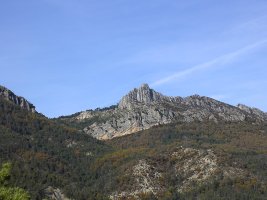 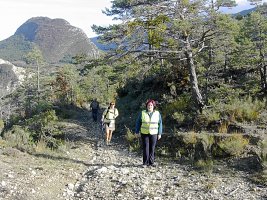 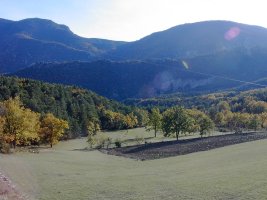 Gars is a village which sits below Mont de Gars and has a spring which erupts from the base of the the mountain itself.
The route back takes you along the road, there is a bridge on the left with signpost number 35. The path now is now a local path so look out for the yellow markers. The path then winds its way through a "shaley" rock formations - climbing as you go.