L'Audibergue is the name of the ski station and mountain south of Andon. The most direct route from the coast is via Grasse & St Vallier-de-Thiey, then turn off for Thorenc on the D5. We completed this walk in March and after doing so would suggest without good weather or snow shoes leaving it until later in the year J. A grade1 in summer or early autumn dependant on the weather, 7.7 km with the short cut 10.7 full length 500 or 700m climbed respectively. 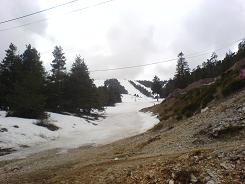 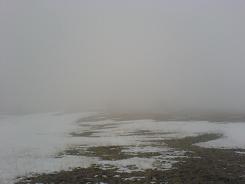 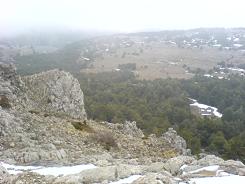 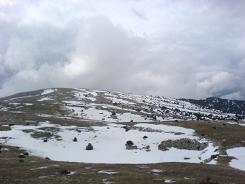 The walk starts at the Audibergue ski station at the beginning of the car park at the base of the first run, I believe it is piste number 5. There is a sign post (172) that directs you off to the right up behind the lift cabin and along the tree line, the path is marked well and takes up the side of the pistes. At sign post 173 the path takes you across a red ski run and would normally zig zag up the piste to decrease the angle of ascent. As the piste was still open to skiers we kept to the tree line a more direct route and promising a rather rapid descent if one slipped. On reaching the crest of the hill the gradient lessened but the snow thinned to icy patches which kept our concentration.

The path makes its way to the head of the ski lift and then follows the edge of the Audibergue and the very steep drop the other side. The landscape is barren with a few shrubs but if you follow the path you will come to a sign post (176a) that indicates the point where you turn north, back down the slope. Keep to the left hand side of the valley as you descend, as you enter the tree line there are yellow markers on the trees. 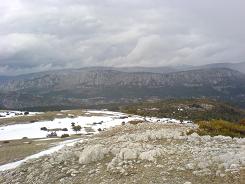 On the right hand side you should catch sight of ruins of deserted buildings, shortly after that the path goes to the right. At this point we took the short cut back to the ski resort, which is marked by a yellow cross. The crossed symbol normally means wrong way, but there was a route marked on the map, it was getting dark & had just started to snow again.

From here on in is described the short cut, we will add commentary for the fuller version when we do the walk in the summer. The path starts well and is reminiscent of the old roman roads we have encountered all over the region. Soon it gets over grown and snow fall can bend young trees or boughs over the route, but eventually it widens out and becomes more obvious. We managed to follow it in 20 cm of snow but it was hard going, it then meets a Ski fond track and there was no snow cover at that time. This takes you back to the Ski Station, the whirring of the lifts is audible from about ½ a km away.

As a foot note, the area around Andon is very pretty and the ski station of L'Audibergue was empty, which is surprising when compared to Gréolières which can be a nightmare on a Sunday. The runs are very simple but there was snow and its condition this late in season (mid - March) was not that bad. 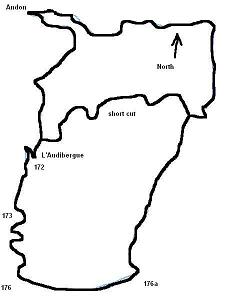