This walk starts in Touët-sur-Var and is called "Circuit de la Lauvette". The walk is 8.6km a climb of approximately 1000m and a grade 2. Despite the fact the walk is relatively short walk the scenery is dramatic. It is described as a grade 2 because the ascent is steep in places and the paths can be narrow with some steep drops. Touët-sur-Var is on the RN 202 in the valley of the river Var before Puget Théniers. There is parking in a number of car parks and on the main road. 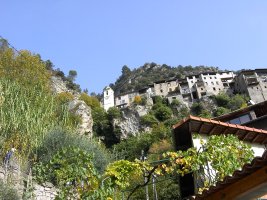 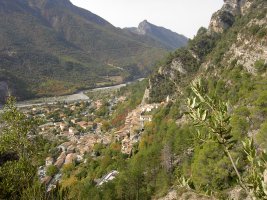 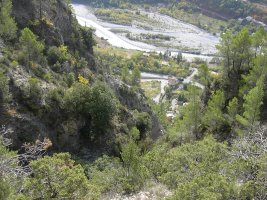 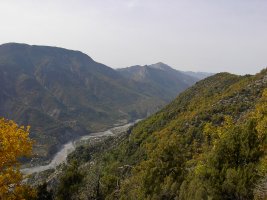 The walk begins after the line of shops on the other side of the road - opposite the Marie. It is signposted the Circuit de Lauvette. The path takes you along a narrow road in towards a cliff at the base of the village. Follow the road up into the village you are aiming for the church, there are some yellow markers to guide you. At the church there is a path that goes off to he right follow it. The path will take you past some ruined buildings and then passed some netting to prevent rock falls.

For the next couple of km you are traversing the cliff face. The path is steep in places and a narrow and the general direction is east. Because of the quick ascent you are soon out of the noise from the road and in a different world. The views down the valley are spectacular with the folds in the rock face either side. The path is clearly defined but I would not like to try it in adverse conditions. The path contours along the valley side and climbs at each ridge. At the last ridge you climb above the cliffs and to sign post number 44. From there on in most of the climb is over. Take a left and follow the path along the valley side up to the buildings on the ridge. There is evidence they are working on the path – resurfacing and putting up new sign posts. Pass under the buildings and there is a small meadow in front of you above the cliffs. This is sign post number 43. 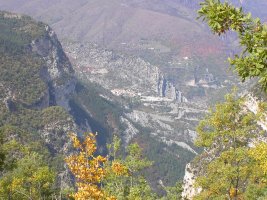 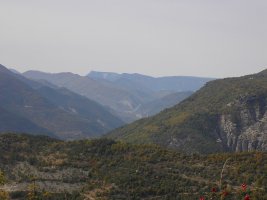 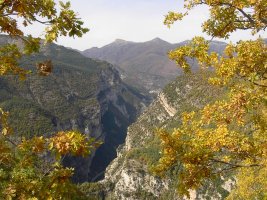 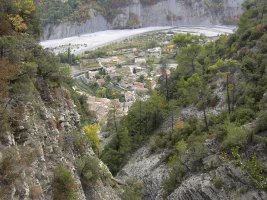 Continue along the path which is wider now and joins a forest road. At sign post number 42. the path splits – go straight ahead if you want to shorten the walk or take a right if you want a view up the Cians valley. The diversion puts a loop in the walk of approximately 1.5 km. You follow the forest road on the way out and a smaller but well defined path on the way back. The views are worth it. The paths rejoin at sign post 40. Also at this point is the start of the return route to Touët – called the postman's path.

This is a wide but steeper descent into the village following a gorge through the trees. The gorge is truncated by cliffs at the end near the village. When the river is in flood the waterfall must be lovely to see. The path weaves you down the cliff face to a point behind the church into the village. From there retrace your steps to the car. 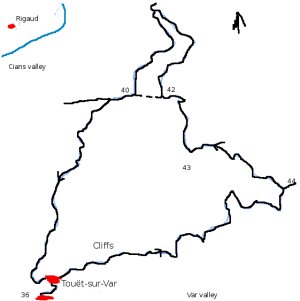