The weekend started with a very windy Saturday so we were unsure about Sunday's forecast - in the end it was a glorious day and a great walk. We would grade this walk as a Grade 2 despite the fact the Bouyon to Le Ferres section was very straight forward well marked via the Gorges de l'Estéron. The way back over the top of Les Combalés was steep in parts, considering the length and height climbed approximately 1000m it earns its grade. Bouyon is south of the Estéron River and the quickest way there from the coast is the RN202 to Carros then the D1 past the village, then past Le Broc. 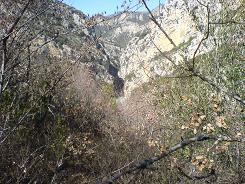 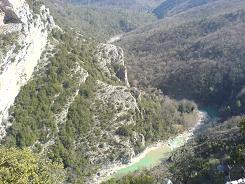 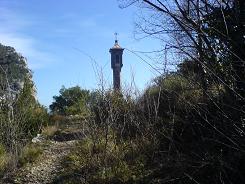 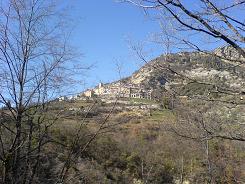 It is a picturesque village with a growing community; the evidence is the new school being built and the renovation of the village houses. There is a small car park at the entrance to the old village and there is a sign post indicating the start of the walk positioned across the road. It is actually marked Les Ferres and numbered number 1. It is not a GR so we are following the yellow markers of a local walk and they have just been re done by the look of them. The path drops you down onto a track, look straight across and the path continues on the other side bisecting the track. The path winds a little then straightens out and drops down again on to the track, turn right and then continue until you see a set of markers. The path drops off the track here and you should see a stump of a signpost, if you study the map it shows a path that divides at this point and rejoins later on. Our route took us on the left hand path dropping down into the valley and across to the other side, the path was wide & had markers but where it rejoined the sign post had also been cut. When we got back & studied the GPS information, the path we had taken did not follow either route on the map and was unmarked. The waypoints given for this path shows the route that was available and the one we took. After the path rejoins with the one shown on the map it heads in a North Westerly direction along the valley of the Estéron in the direction of the Gorges.

As you get to the mouth of the Gorges the path climbs over it and you come to the Oratory of the Dame Le Brec. The path is like an old roman road with kerb stones and steps and stays that way until sign post 102 where it becomes a wider track running up the Vallon des Roubines up to Les Ferres. Les Ferres is positioned at the heads of two Vallons or valleys, the one you have just walked up and the Vallon du Gaje, they both run into the Estéron. 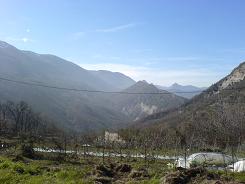 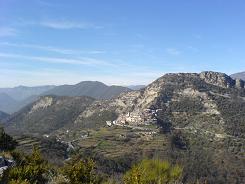 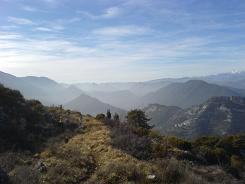 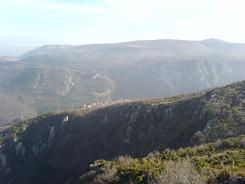 The path does not take you into the village but turns a sharp left up to La Vallière an isolated house and then up a ravine. It then continues on under a cliff face, here the soil is almost green with copper deposits. Here on in the path takes a South Easterly direction climbing obliquely up the mountain side, you cross a track at signpost 116 and continue on up.

The path climbs and contours into some trees and the yellow markers are ever present. Here the path becomes steeper as you come to the final ascent. The last part of the ascent the path follows the cliff edge and finally views of the village of Bouyon come into sight. The path from there on in is very good, you pass sign post 100 and follow it down the mountain side into the village. From there on in there are no real surprises. 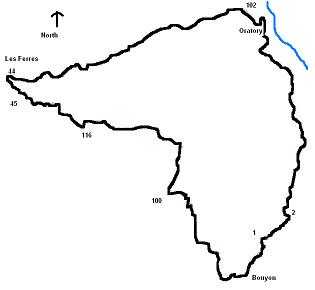