The day started cloudy on Sunday but it turned into a sunny day, a glorious day for walking. The walk starts in Coaraze up the D15 from Contes, the quickest way there is from Nice via Drap. As a rule of thumb in this area behind Nice the routes north south are much quicker than east west. Coaraze is also the starting point for an alternative path to Rocca Sparvirèa a deserted mountain top village further up the valley. That is for another day, this route took us past 3 Chapelles; St Sébastian, St Michel and Bleue. There did not seem to be a lot of parking on the way into the village but the road opens out into a square before going into the old village. Just after the bar there is a left turn, going away from the old village and there is some car parking there. Walk back to the square and follow the road back out of the village, take care on the road as there are many budding Alain Prosts and not all male or young. Follow the road for 1.4 km and you will see a sign post on the right number 209 for Col de Rosa. 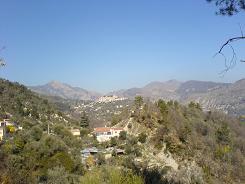 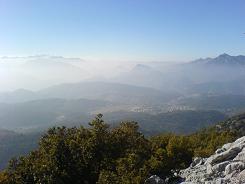 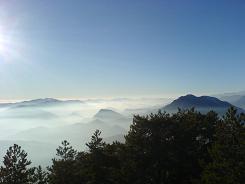 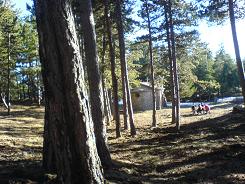 This takes you on a minor road through the hamlet of Gardiola and past the Chapelle St Sébastian, the road does fork, keep right. The road ends with some houses and the path climbs on the right just before the last building, it is sign posted. There are no GRs on this route so you are following local markers which here were a mixture of yellow splashes and pink dots. The pink dots featured more on the descent and look like surveyors marks. Here you finally leave the buildings and tarmac behind and you head off into the trees climbing as you go. There is a warning notice on the last building stating a change of ownership of land. Later up the path there is some orange tape drawn over the path but you keep to the yellow markers and continue your ascent. The path does eventually run parallel to a wider forest road; the yellow markers are still present be vigilant. Eventually the path joins the road and the road runs into private property boarded by a small electric fence. The path turns right here climbing up and around, continue until you come to a junction that is signposted, take the left fork for Col de Rosa. The path starts to level out and runs through an oak wood, you pass beneath an electric pylon and keep straight on. At Col de Rosa you come to another junction, there is a path to Levens but you take the route to Mont Férion, it is a sharp right.

Now you are on a Crête, a mountain ridge with fantastic views on both sides, the path is wide and well marked. At sign post 278 you can either take the path or the forest track running parallel to it they both come to sign post 274 and the Chapelle St Michel. The temperature was in the early 20s but there were still snow patches in shaded dells as it was still February. From here on in forest roads intersect the paths many times so you need to remain vigilant. After the Chapelle St Michel, keep to the path and the yellow markers you cross the forest road twice, there are great views of Coaraze from above. 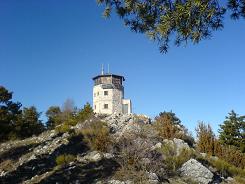 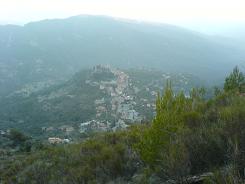 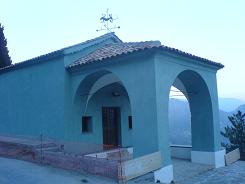 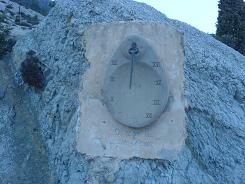 There is a forestry tower and refuge, Tour de guet. The path continues along the edge for a while but from here on in the descent begins and is a bit of a scramble, in places. You cross a forestry road at signpost 206, and hit another junction at 205. Here you can choose which route to take to the village; we took the one marked Coaraze, which is relatively steep and you cross a forest road twice. This takes you signpost 204, then 203 and 202 where you join a village road. This takes you past the Chapelle Bleue and a sundial, swinging round back to the square in the village and the car park.

One point that I should mention, we did see a lot of mountain bikers on this route, well 6 in 4 hours. The last ones were a pair of lads from Cannes, they had cycled from Duranus taking the forest tracks. We past them at the Tour de guet, and the tail cyclist fell breaking his wrist. He had just remounted after carrying his bike down a rock field, he probably made 5m before he fell. His buddy was very calm and called the emergency services and they were there in 30 mins by helicopter - impressive at 5pm on any day. We tried to make the lad comfortable before the paramedics arrived, the 3€ space blanket from Deco finally had an airing and we had some water & sugar sweets. He was obviously in a lot of pain and couldn't move, but luckily he had buddied up for the cycle so had a way out and was kitted up with a helmet etc. The 2 single riders we had seen earlier had they suffered a similar accident would have been up S*()& creek without a paddle, the one without the helmet wouldn't of even had a boat.

The mountains are beautiful here, the snaps I took that day with my camera phone are testament to that, but they are also dangerous for the reckless - take care. 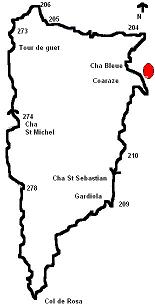